My thanks to the 60+ visitors who contributed conversation & purchased art at WXSW opening (show runs through May 14, 2016), at #183 Northrup King Building, 1500 Jackson Street NE, Minneapolis, MN

The year 2014 has been a busy AND successful year for my development as an artist.  More details and pictures to come soon in this reverse chronological series of updates.

I again escaped the Minneapolis winter, this time painting in Phoenix and Tuscon!  Wonderfully different landscapes in the valley of the sun and the high Sonoran Desert.  Check out pictures coming soon — filed under Arizona!  Best of all, three groups of passersby purchased a painting each.  Thanks to my new friends Arizona!

I spent a week in the South Dakota Badlands painting the wide open spaces there.  Lack of snow and frequent sunny 40 degree days were an improvement over snowy Minneapolis.  Even so, I often painted from inside the protection of the car as it was sometimes very windy, even shaking the car as it sat on the edge of the wall overlooking the lower prairie.  I enjoyed sunny 60 degrees on Black Friday and painted two 16″ x 20″ pieces that day — my largest plein air pieces to date thus far.  Please check out the pictures — “Saddle Pass Trailhead” and “Snow Fire Sunset”,  as well as may other plein air studies, posted under Badlands, Western South Dakota.

Bassett Creek Arts, Bryn Mawr, Minneapolis hosted an opening reception for my show “A Year of Wildflowers”.   A crowd of about forty enjoyed food, drink, and conversation.  Guests purchased two paintings and many note cards — and for this neighborhood support, I’m especially grateful!   A day of painting at Parley Lake Winery resulted in another sale.  And, a short video of me painting the fall colors at Wirth Park led off the 10 pm October 16 weather segment on WCCO – CBS!

Thanks in large part to my gallery mates, I participated in three plein air festivals — including two held in Red Wing, MN and Hudson, WI.  What is a plein air festival, you may ask?  An arts association or art gallery organizes and promotes the weekend or week-long event and invites artists.  Artists travel and reside in the festival area and complete many works, often painting several paintings each day.  Often, a plein air festival includes a “Quick Paint” competition.  During a timed 90- to 120-minute period, artists complete their best effort to capture subjects within a defined geographical area.   Social activities and a juried exhibit “round out” the plein air festival that is often organized to attract visitors and buyers.

Art-A-Whirl was a great party!  A continuous stream of visitors visited our gallery.  Every day of the three-day-long festival brought a painting sale as well as sales of many note cards.  Early Saturday and Sunday mornings, I squeezed in two wildflower portraits and two landscape paintings of Wisconsin trout streams before reporting to the gallery for its 12 Noon opening.

On Easter Sunday, April 2014, I painted a small study of Snow Trillium blooming at Eloise Butler Wildflower Garden, a local nature center gem.  This painting would become the beginning of “A Year of Wildflowers” a series of over fifty wildflower portraits.  A subsequent, October 2014 Bryn Mawr Bugle press releases summarizes the work effort:

A Year of Wildflowers

After 10 years of black and white, Greg Lecker turns to color.   From 2003 to 2013, Greg Lecker illustrated his Bryn Mawr Bugle nature columns with black and white illustrations he drafted to match the written narrative. This summer, Greg turned to oil pigment to capture over fifty wildflowers in a series of plein air paintings completed at Eloise Butler Wildflower Garden, the Minnesota Landscape Arboretum, and in Bryn Mawr gardens. The French art word, Plein Air, translates to “open air”; and it describes the revolution facilitated by the invention of metal tubes to transport ground pigment and linseed oil from the relatively dark artist studio to the brilliant outdoors!

Each wildflower portrait requires one hour to three hours. Greg admits that his painting speed has increased over the summer. And, the increasingly earlier closing time of Eloise Butler Wildflower Garden gives added incentive.   The paintings are gem-like – just five inches by seven inches. Viewers are invited to come in close to view the flower from two to three feet – the same vantage point from which the plants were painted. Note cards reproduce the images and their brushwork texture.

Why paint “Plein Air”? Why not just take a photograph? Greg explains that the time spent studying the subject fixes in his mind the day and allows additional benefits:

– To have the luxury to watch a yellow ladyslipper’s “balloon” inflate with the warming sunlight of a quiet Sunday morning. – To watch a bumblebee force its way into a turtlehead or bottle gentian flower, a hummingbird feed at jewelweed, a dragonfly alight on one’s paint box, a tree frog leap onto a boneset leaf, or a gray squirrel repeatedly sneak past me with black walnut fruits in its mouth to the same tree to gnaw on its quarry over and over! – To observe spent brown leaves dry from dew and rain, then move just enough to release a snow trillium bud and stem which bounce upward on a spectacular Easter Sunday.

Gallery receptions in January and March introduced new work to a number of guests AND netted several sales.

I celebrated the new year with a 20-hour day of framing, moving, and hanging art January 1, 2014 at the Northrup King Building, 1500 Jackson Street NE, Minneapolis, MN.  Northrup King Building is THE building for contemporary art studios and galleries.  Several plein air painting friends welcomed me into their cooperative gallery, Gallery Immagine, #183 Northrup King Building.  The move would turn out to be positive one in my development as an artist and in my education in the  business of art.

On September 10, before attending an evening event at the Arboretum, I painted a study of a planting that illustrates the orange and purple color scheme that planners selected for the 2013 growing year: 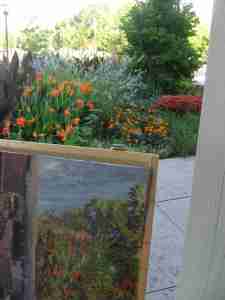 “Something Sketchy” Group Exhibition, Bell Museum of Natural History Jaques Gallery, Minneapolis, MN on view September 5 through December 29.   The work of many Sketch Night artists (including me) are on display.   For hours and more information, visit:  http://www.bellmuseum.umn.edu/index.htm.  Come tour the gallery and create your own artwork using nature specimens that are on display.

Over two days visiting the Minnesota State Fair, I painted five quick studies of the fairgrounds.  Here is a photograph of one painting in progress:

Later that day, I stopped by the State Fair Fine Arts Exhibition to pose with my accepted painting:

An unexpected mid-August business trip took me to Maine; and I “piggy-backed” a short visit to nearby Acadia National Park to camp and hike.  I painted as much as physically possible during three days of wonderfully clear days! 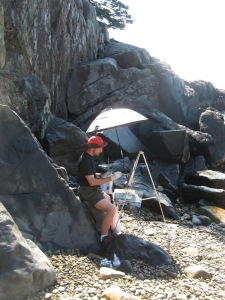 In early August, over the weekend of the city’s three art fairs, I painted a larger work capturing morning light falling across Loring Park’s circle garden. 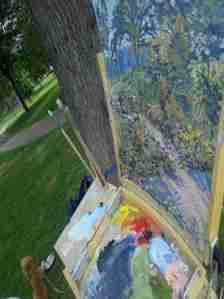 Also in early August, I joined Outdoor Painters of Minnesota (OPM) for an event that has become an annual event:  a “wet paint” sale.  Parley Lake Winery hosts the event where dozens of painters scatter across the grounds to capture a day at Dierdorff Orchards and Parley Lake Winery.   The winery’s owners, artist Deb Zeller, and her wine-making husband, Steve, are wonderful patrons of the arts and extended generous hospitality to us.

After returning to Minnesota, I finally joined Outdoor Painters of Minnesota (OPM), an organization of plein air artists, some of whom make a living painting.  At their first “paint-out” I attended, I selected as subjects:  a red barn, a church, and the Minnesota River Valley.  The Landing is a collection of restored and relocated mid to late 1800s structures sited along the Minnesota River near the site of an early river landing and inn.  The mix of historic structures and open spaces was so intriguing that I returned the following week to paint an oak savanna with farm buildings and to tour the buildings, most of which are interpreted by costumed volunteers who personify characters that they have researched.

I enjoyed teaching drawing at Chautauqua Institution during my week-long visit to what I characterize as a “summer camp” for adults.  What was unique about my class was the large number of nature models that I brought along with me to set up in the classroom.

My students made a lot of progress during the week.  Here are photos of the work they shared on the last day of class: 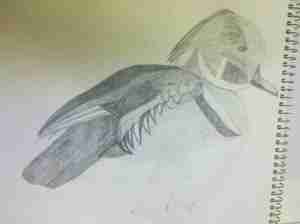 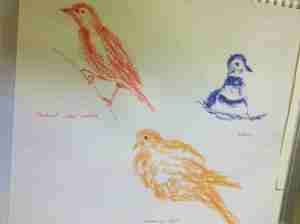 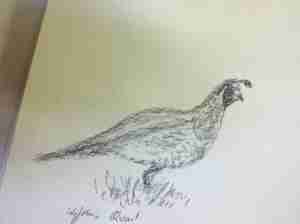 Between class set-up and teaching and concerts and lectures, I drew many campus scenes.  I also focused on improving my speed and accuracy while painting three studies:  Bestor Plaza Fountain, Brick Walk Café, and Hall of Philosophy, a covered outdoor lecture hall patterned on the Greek Parthenon.

On the journey back to Minnesota, while waiting for the departure of the Lake Michigan Car Ferry, I painted a study of the dry-docked Spartan, the “sister” of the ship, Badger, that would carry my car and me across to Wisconsin.  Click on the “paintings” tab to view these.

I spent much of my free time this month and the past six months preparing to teach an upcoming drawing class in New York State in July.  But I did squeeze in a few studies of Loring Park, an urban park near my neighborhood.  Click on the “paintings” tab to view these.

Since a planned local plein air workshop was “snowed out” by a record-breaking 12” snowfall, I travelled to a nearby state park that experienced simply unseasonably cold weather.  The rocky trails were far less crowded than usual. 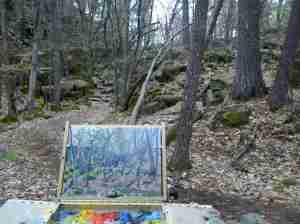 For several months, I happily spent Sunday afternoons drawing at the Florence Hill Figure Drawing Cooperative.   Click on the “figure drawing” tab to view samples of this work.  The local newspaper, Star Tribune compiled a beautiful profile of this cooperative in their June 4, 2013 issue, pages E1 and E3:

A week-long plein air painting workshop on Santa Catalina Island, led by Joe Paquet, transformed the way that I think about landscape painting.  The workshop prompted me to really study what I was seeing – values of light and dark, and colors.